Getting to viewing the differences between a current version of the page and its edit history.

There are a few questions that need to be answered:

How do you wish to view the differences?

Excited to get this feature available! Let me know your ideas.

I also would prefer to see the whole page with the differences highlighted, Google Docs style. In UI format it will be easier to spot the differences, since in export format, the callout, code blocks and tables have the added format that is harder to read (added “” etc’).

There is one more hidden question here:
For google docs and dropbox, you see the change between a commit and the one before it.

I do not think this is applicable for DeveloperHub, as you probably want to see the changes between the current version and the published one - so you are confident when publishing.

What do you think, which commits will you be comparing?

Great news, we have it now available online

Please try it out and let me know what you think. 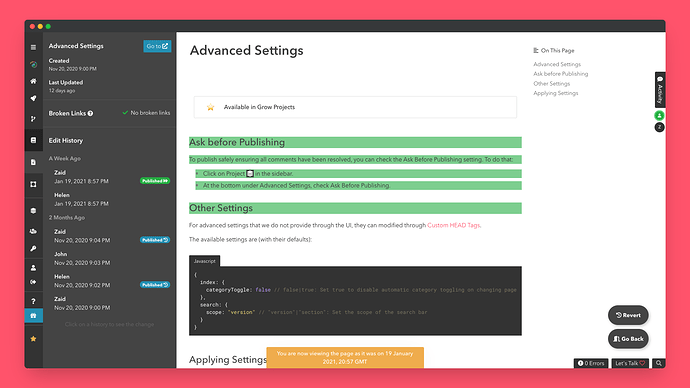 Looks good from my perspective! Kudos!

Will report back any quirks, etc., if any, once I have a chance to look over some more edit history.